We know that choosing the right tattoo artist can be a stressful process. We understand options are unlimited since the explosion in popularity of cosmetic tattooing. We want you to know we are here for you; to answer any questions you may have, help you prepare for your appointment, and check-in with you during the healing process. We’re doctor and surgeon recommended, top-rated by Calgarians, and truly passionate about giving men and women their confidence back.

“In sickness and in health, I believe that when you look good, you really do feel better. Giving people confidence in their own skin is what drives me to be the best, and to always keep learning in the medical and cosmetic tattoo industry.” 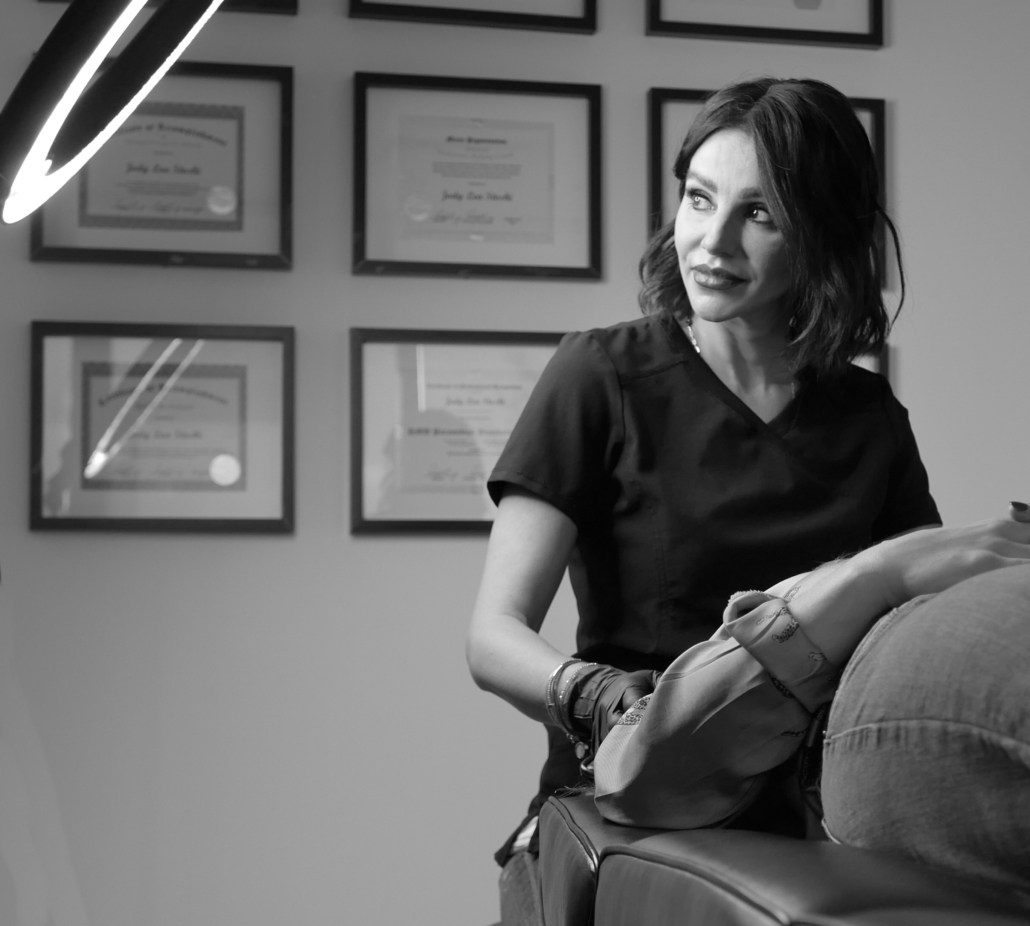 After earning her Business Diploma from SAIT and then studying at Canada’s #1 Beauty School, Blanche Macdonald, Jody Stoski’s career began as a Professional Makeup Artist freelancing as “Cinnamon Girl”  in film, fashion, print, television, and weddings.

Through makeup artistry Jody learned about permanent makeup and cosmetic tattooing and earned her certification from BioTouch Institute under Lisa Lam. Trained as a doctor, Lisa treated medical cases with tattooing, and invited Jody to work closely with her. Jody was recognized for her unique brow stroke technique that provided natural-looking brows for alopecia patients and realized her true passion was not necessarily just makeup, but helping people feel confident in their own skin!

Jody then connected with Dr. Linda Dixon of Kolorsource, a medical physician working in cosmetic tattooing. She was invited to apprentice to further her skills in scar camouflage, 3D areola tattooing, and scalp and hairline micropigmentation, and it was at this time she opened her own clinic, Cinnamon Girl Clinic.

After treating over 10,000 paramedical and cosmetic patients through Cinnamon Girl Clinic, Jody is recognized as an industry leader, and has served as a board member of the American Academy of Micropigmentation.  She has partnered with doctors and plastic surgeons, and offers information sessions at local hospitals regarding the various options available to those recovering from injury or trauma.

Little did Jody know, she would be using her scar camouflage skills on herself just a few years after opening Cinnamon Girl Clinic.

In 2013 she was diagnosed with thyroid cancer and underwent a thyroidectomy. Now a member of the community she had been helping, she battled depression and anxiety related to both her health and physical appearance. With a large neck scar after surgery, Jody felt people’s gaze shift from her eyes to focus on her scar, a constant reminder of the disease she wanted to put behind her. When she was ready, she put her skills to the test on herself, incorporating the the scar protocol and revision that she offers to her clients today.

The profound transformation Jody experienced first-hand made the terms paramedical tattoo and healing tattoo interchangeable. Her doctors could not believe how she was able to camouflage the scar, and she was finally able to move forward and put cancer behind her. Through the illness and healing, Jody redefined herself and her business solidifying her path, purpose, and journey in the medical tattoo field.

Now cancer-free, Jody’s goal is not only to continue healing through Cinnamon Girl Clinic, but to make medical tattoos more widely accessible while  elevating standards in both medical and cosmetic tattooing. Jody has recently opened her own Paramedical Tattoo Academy to provide training and help more individuals feel confident in their own skin!

Involved in the arts from a young age, Elissa excelled at painting and pottery and loves to create things with her own hands. Against her artistic calling, Elissa graduated from Mount Royal University with a degree in Accounting in 2013 and then worked in the Oil and Gas field for a few years, eventually deciding that this career path wasn’t fulfilling for her.

When permanent makeup became a trend in 2015, her interest was sparked. She started to work at MAC Cosmetics as a makeup artist to gain experience in the industry and when she picked up the eyebrow brush doing special events and wedding makeup, she knew this was what she was meant to do! While working at MAC, Elissa earned her microblading certificate and started microblading eyebrows on the side. Her experience with applying makeup on different complexions has transitioned well into her permanent makeup career and she has continued her education earning numerous certificates in permanent makeup and aesthetics – now including Lip Blush!

In 2019, Elissa joined the Cinnamon Girl team and continues to help clients feel more comfortable in their skin, the passion that drives Elissa’s and offers her a fulfilling career.

When she’s not microblading eyebrows and perfecting eyeliner at Cinnamon Girl, she loves to refine her kickboxing skills at a Muay thai gym and has a handful of tournaments under her belt. For Elissa, kickboxing is not only a good way to exercise, but great to practice discipline, patience, and humility. She loves to encourage people to maintain a healthy work-life balance and she has teaches the sport part-time. 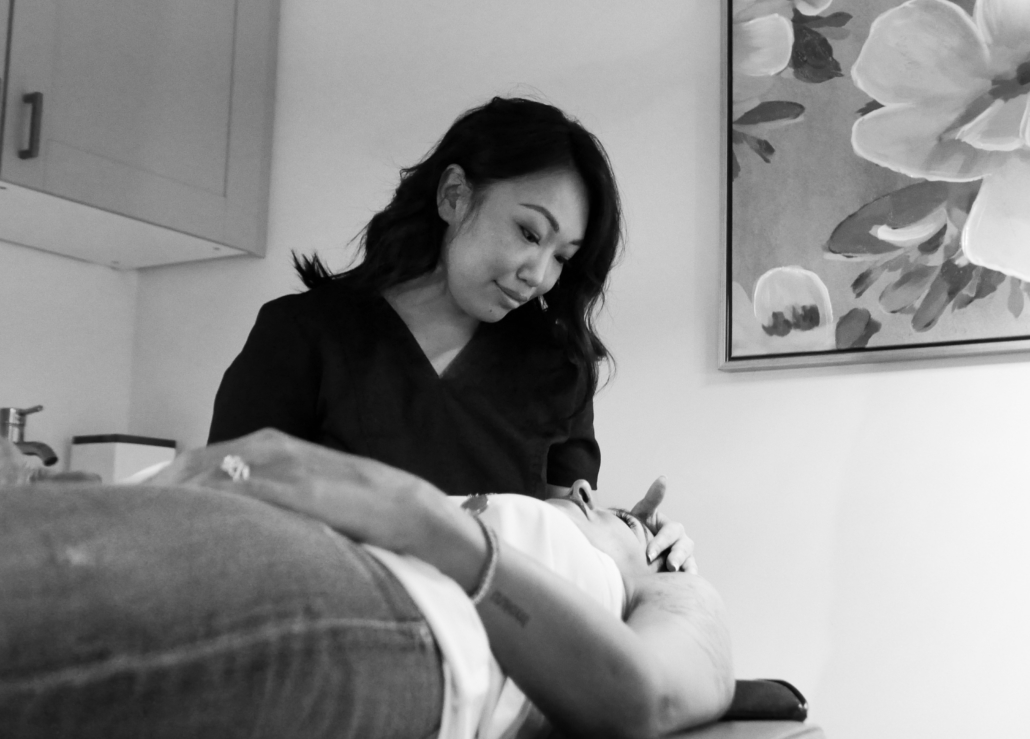 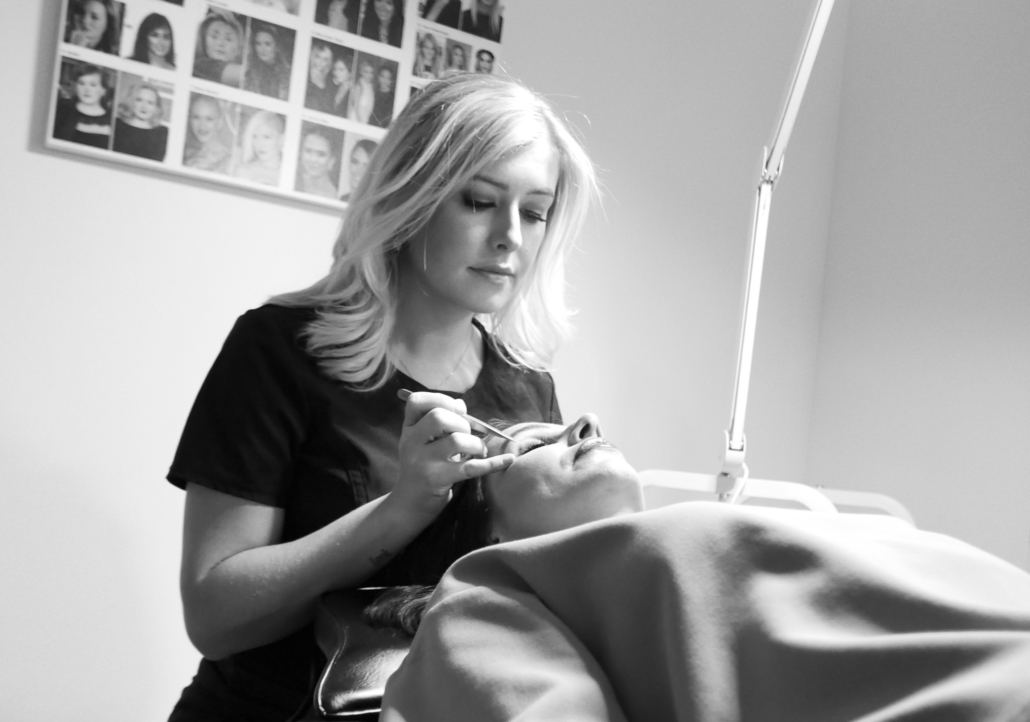 “Nothing makes a woman more beautiful than the belief that she is beautiful.”

Amy began her journey in the medical and cosmetic tattooing industry through cosmetic surgery in 2013. A certified Surgical Hair Transplantation Assistant with the International Society of Hair Restoration Surgery (ISHRS) of hair transplantation surgery, she became very interested in scalp micropigmentation as another option for those suffering from hair loss.  By 2016 Amy completed her first course in scalp micropigmentation and advanced her skills in Los Angeles in 2018 with a second course. She then joined the Cinnamon Girl team and earned her certifications in top eyeliner, bottom eyeliner, and eyebrow lamination.

Amy says that she loves what she does because she is able to help people match the confidence they feel on the inside to the way they look on the outside. Working with cancer and trauma survivors and being able to help heal those outward wounds with tattooing or giving them a bit of glam to help them on their journey makes here feel so lucky to have this career.

Outside of work, Amy is a wife and mother of one wild boy! He keeps her busy and active, walking with him and here floppy dog to the park. She also keeps her mind and body sound with hot yoga, and loves a good wine tasting!

Amy hopes to see the industry grow in the direction of community over competition. She hopes that health, safety and overall client well-being is put first so that every person that chooses to get a paramedical or cosmetic tattoo has a great result and experience. Growing as a community of artists that elevate standards in the industry  is the goal.

Kayla started doing makeup and brows at the age of 15. She has always known that she wanted to do permanent makeup. In 2010, at the age of 19, she received certifications in Brows, Eyeliner & Lip Tattooing. She then went on to do advanced training in colour correction, shape corrections and microblading in 2015 at Biotouch Canada, in Vancouver.

Specializing in brows, Kayla has had a successful career in tattooing, working at The Brow Studio before joining Cinnamon Girl Clinic. She is eager and excited to meet you, to help you achieve your best brow and permanent makeup goals! In her spare time she loves travelling, and says permanent makeup makes travel easy, you don’t have to bring a lot of cosmetics or spend extra time worrying about how your makeup looks! 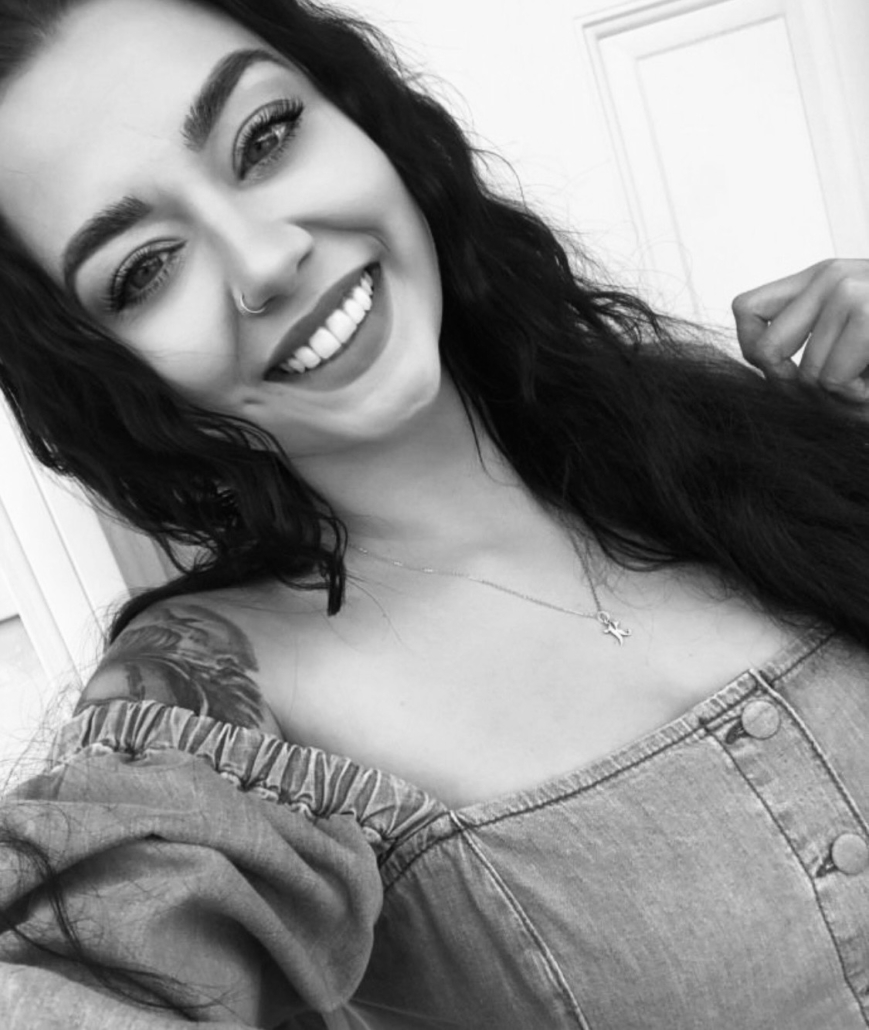 “Be your own kind of beautiful.” 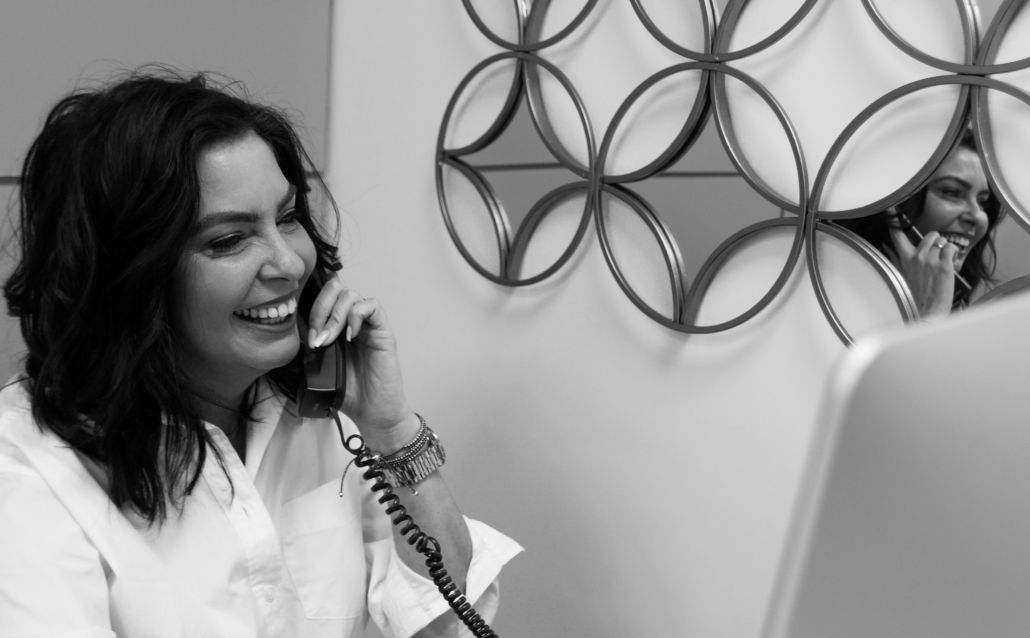 Colette puts a smile on the face of everyone who walks through the Cinnamon Girl Clinic doors.

From greeting clients and guiding them through processes, Colette is there to answer any questions clients may have and bear witness to how Cinnamon Girl Clinic truly helps transform the lives of others.

Passionate about helping others, Colette hopes the Canadian healthcare system will adapt to cover even more treatments for Cinnamon Girl clients suffering from health issues who could enrich the quality of their lives with tattoos.

Tyne has been in the cosmetics industry since graduating from John Casablancas Art Institute in 2009. Working for multiple worldwide cosmetic companies she found her groove making both men and women feel their best on a day-to-day basis. She has always been drawn to the transformative nature of cosmetics, and how it can make such a difference in how people feel about themselves.

After learning about paramedical tattooing, she has fallen in love with the healing side of tattoos and the life-changing effects a tattoo can have. She has now seen first-hand the transformations and confidence associated with these tattoos. With Tyne’s background in makeup, she’s a great resource for Cinnamon Girl clients to answer questions and discuss concerns. Tyne will walk you through the process of booking, tattooing, and healing. Known for her sense of humour, maybe she will tell you a funny joke while she’s at it! 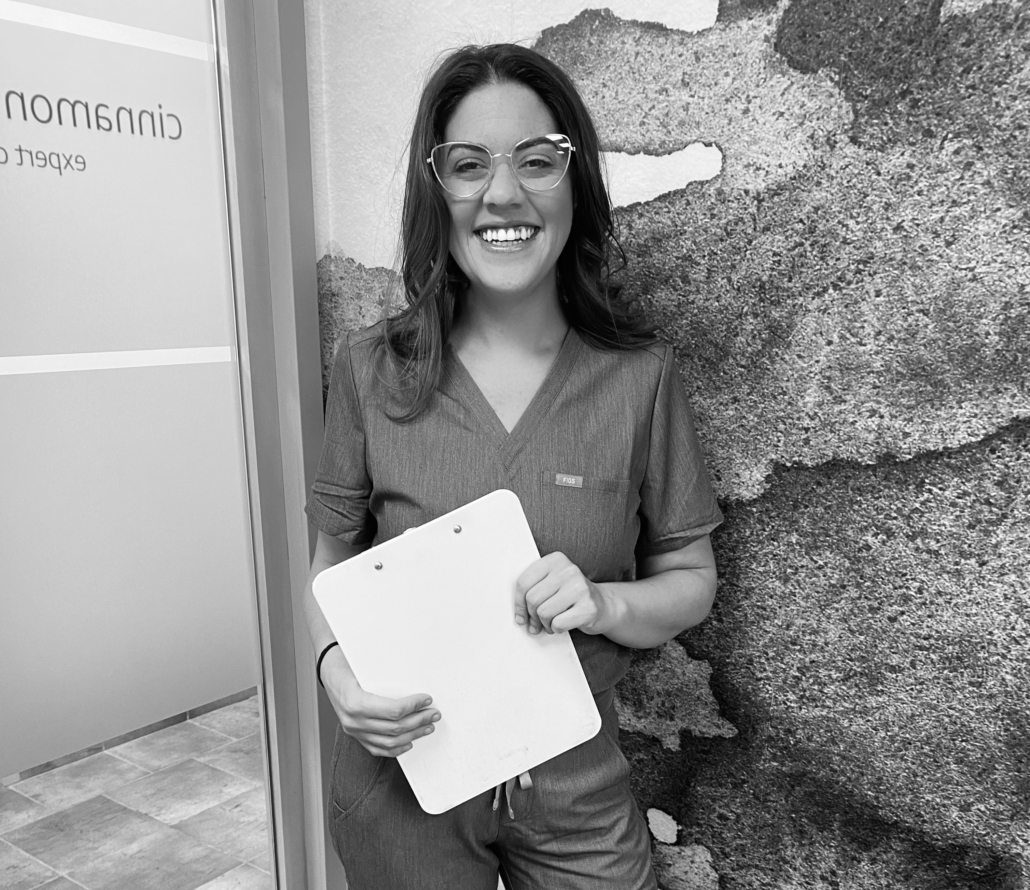 “Beauty is being the best possible version of yourself on the inside and out.” 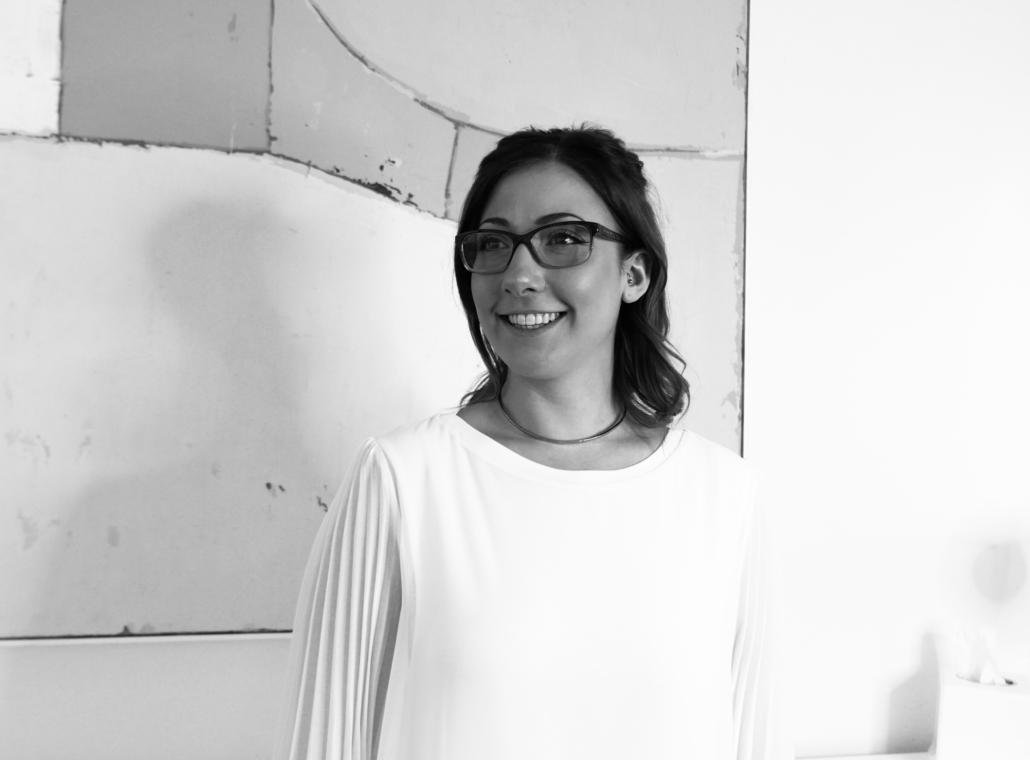 “Beauty begins the moment you decide to be yourself”

Living in Calgary her entire life, Kayla loves how easy it is to escape from the busy city to enjoy the outdoors. To maximize her time in the mountains, she says it sure is nice to have an easy breezy daily makeup routine!

Kayla is an office administrator at Cinnamon Girl while studying at the University of Calgary in Sociology and Criminology. She is especially interested in mental health, and overall making a difference in the communities that she is a part of. At Cinnamon Girl, she loves helping to build confidence in others, so they can live their best lives.

Kayla is also extremely passionate about animals and is researching the benefits of animal assisted programs in elementary schools and has a dream to open a animal sanctuary outside of Calgary one day! She loves spending time with her family, her dogs, writing, and painting.